All eyes are on Bond this month, with the film franchise reaching its 50th anniversary and the much-anticipated Skyfall about to open at the box office.

Of course gadgets are essential components of any Bond film and over 150 aircraft and spacecraft have featured across the 22 movies.

Private jet aircraft have featured many times: discretion, speed and cutting-edge cool are clearly essential requirements for the superspy.

Here are a few of our favourite private jet moments from the world of Bond:

Several scenes featuring Bond and other characters were filmed at private jet terminals at Germany's Friedrichshafen airport and at Farnborough airport.

Other private aircraft also feature briefly in the movie including a Citation V and a Hawker 800. 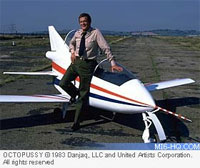 The tiny, single-seater aircraft was designed in the late 1960s by US aircraft designer Jim Bede.

It has a small, streamlined fuselage and a tiny cockpit, with the pilot forced into a semi-reclined position. It was sold in kit form and proved very popular before the Bede Aircraft Corporate went bankrupt in the mid-1970s. A few hundred BD-5 were completed, with some still flying today.

The smallest aircraft available to charter through PrivateFly's network is the (comparatively spacious) Diamond Twin Star, which seats up to 3 passengers.

Bond villain Auric Goldfinger famously met his end being sucked out of the window of his private jet in 1964's Goldfinger. The aircraft, piloted by Pussy Galore, was a Lockheed JetStar, the premier executive jet of its day.

It was a large and heavy aircraft, seating 10 passengers, and notable for its four rear-mounted engines. 204 aircraft were produced before the company ceased production in 1978. Goldfinger's jet had a rather unusual customisation: surveillance in the lavatory.

If Goldfinger was looking to charter a similar private jet today we would recommend the Challenger 300 or G200, both of which offer longer flight ranges and more comfortable (surveillance free) cabins than the JetStar.

How to charter Bond jets