For private jet charter advice and prices to or from Paris call our 24 hour expert Flight Team on 020 7100 6960 or search for instant estimate prices from your local airport using our flight search:

It's undoubtedly the most important private jet hub in Europe, but who exactly is flying in and out? By analysing latest European data* for all flight movements, PrivateFly can reveal the top ten private jet destinations flying to and from Paris Le Bourget airport. 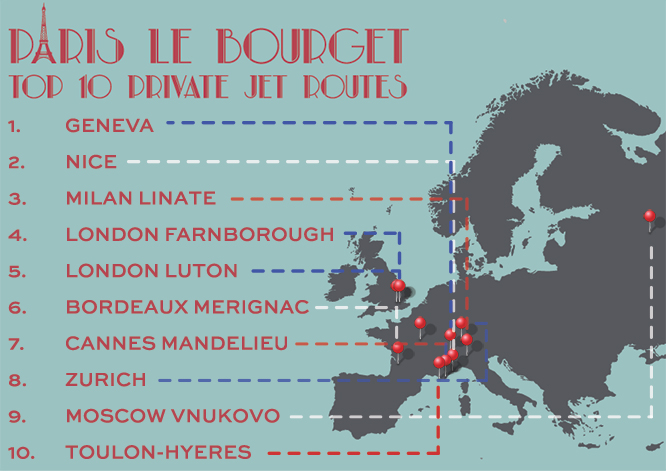 The runaway winner is Geneva, proving a key private jet route between the two financial and tourism centres, year-round.

A key routing between two of Europe's most important fashion and business capitals.

Farnborough airport is the most popular of London's private jet airports, when it comes to flying to and from Paris Le Bourget, and it's also the fastest growing.

One of the most famous wine regions in the world, the private jet routing between Paris and Bordeaux is showing significant growth, also reflecting limited connectivity to Bordeaux by scheduled airlines.

Cannes Mandelieu is the Cote D'Azur's exclusive private jet airport. Private flights to and from Paris are down year-on year but are especially popular during the Cannes Film Festival in May.

The private jet routing between Switzerland's largest city and Paris has dropped in popularity, but is still a strong city-pairing throughout the year.

Moscow Vnukovo and Le Bourget are both dedicated private jet airports. This serves one of the most important business and private wealth routes between Russian and Western Europe.

Although this route is down versus 2012, this nonetheless shows how Le Bourget is used for private flights to connect with relatively inaccessible locations in France, such as Le Palyvestre Airport in Toulon-Hyeres.