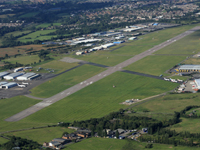 Big enough to cater for most aviation needs but small enough to offer a bespoke and personal service, Coventry Airport is the ideal place to begin and end your private charter flight. Efficient processing, discretion and high standards of customer service are the norm at hand through our airport-managed jet centre. Coventry Airport is situated at the centre of the UK, close to all the major motorway networks; making Coventry one of the most easily accessible airports in Britain.

First opened in 1936 as Baginton Aerodrome, it has been used for general aviation, flight training, and commercial freight and passenger flights and a World War II fighter base.
In 1982, Pope John Paul II celebrated Mass with a crowd of around 350,000 on his only UK visit. From 2004-8, Thomsonfly operated scheduled jet passenger flights from temporary hub facilities at Coventry. Plans to build a permanent passenger terminal facilities were rejected by the High Court in 2007.
The airport was briefly closed in 2009, before re-opening as a commercial airport in August 2010.The airport is now owned by Sir Peter Rigby.

Coventry Airport is Home to the Midlands Air Museum. The Museum houses a unique collection of aircraft and engines in the Sir Frank Whittle Jet Heritage Centre, as well as supporting exhibits illustrating the fascinating story of the jet age, Wings over Coventry, WWII and RAF Baginton, Rotors over Coventry and many more exhibits. The historic aviation stories are told in pictures, videos and artefacts including an animated display.
Coventry Airport is also home to AIRBASE, the living aviation museum. Home to over 30 vintage planes, AIRBASE offers a fun packed programme of plane adventures, taxi-ing rides, a cine theatre, maintenance demonstrations, engine starts, pleasure flights and for the more daring, thrill rides.

Coventry Airport has a strong history in hosting air shows, displays and fly-ins, most recently it hosted a fly-in on Sunday 26th September 2010. Organised in support of Help for Heroes, in addition to watching aircraft like the Vulcan, Tornado and Jet Provosts flying in, visitors were also able to experience hangar-based shopping, entertainment and even participate in the whole fly in experience by taking a helicopter flight around the airport.