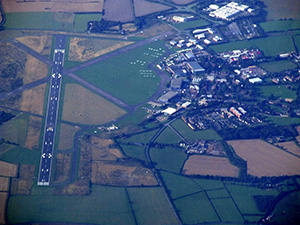 Cranfield Airport is an airfield located just outside the village of Cranfield in Bedfordshire, England. It is home to the Met Office facility for Airborne Atmospheric Measurements. It is also the nearest airport to Silverstone, home of the British Grand Prix.

The airport was originally built in 1935 by the Air Ministry and opened on 1st June 1937. It was used as a military base during the Second World War. It initially had a grass airstrip, which was soon replaced by 3 hardened runways in 1939.

During the war it became a target for the enemies who dropped bombs and mines over the airport and the town of Cranfield.

The airport is a customs port of entry and its location makes it an attractive option for those wishing to travel to the Midlands and London.

Passengers travelling via the airport can also benefit from direct helicopter transfers if needed resulting in passengers being in London under half an hour after landing at Cranfield Airport.

Airport Code: ICAO – EGTC
Latitude: 52°04'20"N
Longitude: 0°37'00"W
Elevation: 358ft (109m)
The airport has 2 runways, the longest of which is 5928ft
Although this runway length means it can handle small it medium sized airliners, the rest of the airport’s infrastructure is incapable of supporting scheduled passenger flights.

The airport’s operating hours are as follows:

There is 24-hour availability but this must be arranged beforehand.