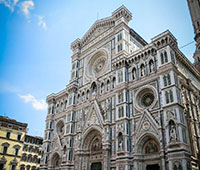 It also serves visitors to the popular Italian region of of Tuscany.

Search for pricing for your itinerary using our Flight Search. Or for personalised pricing and advice on private jet or helicopter charter to or from Florence Airport, contact our Flight Team (24 hours) on +44 (0) 20 7100 6960.

Peretola Airport, as it was known then, was created and opened in the early 1930s, initially as a large field where aircraft took off without clear direction. But later in the 1930s, it was enlarged and a proper asphalt runway was built.

The first passenger flights were introduced at the airport in the early 1940s, and Alitalia introduced domestic routes, connecting Florence with Rome, Venice and Milan in the 1950s and 1960s.

A redevelopment project took place in the 1980s, lengthening the runway, introducing lighting and navigation systems, and rebuilding the airport terminal.

In 1990 the airport was officially named after Italian cartographer Amerigo Vespucci and further development of the runway and airport buildings were undertaken over the following years, to support the significant growth in pan-European air traffic. It is now owned by Toscana Aeroporti S.p.A, which also owns and manages Pisa Airport.

The airport is located 9km north-west of the city of Florence, taking approximately 20 minutes to travel the journey from the city centre by car.