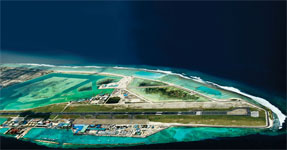 A landing strip was built on the (then inhabited) island of Hulhulé in 1964, and the first aircraft to land was a Royal New Zealand Airforce transport flight. Between 1964 and 1966 the airport was developed by a workforce of 2250 Maldive volunteers. The nearby island of Gadhoo was connected to Hulhulé, before the airport was officially opened by the President of the Maldives Ibrahim Nasir in 1966.

The airport expanded steadily, and in 1996 a new terminal was opened.

The airport was renamed in 2011 after the second President of the Maldives, Ibrahim Nasir who was influential in the development of the airport in the 1960s. In 2017 the official name was changed again, to Velana International Airport.

Your views on Malé Airport

In our recent "Favourite Airport Approaches" poll you said:
"It is an Island Airport, on its own island..The airport is surrounded by deep blue seas, turquoise reefs, white sandy beaches and palm trees..."
"approaching over the Maldivian Atolls where you often see turtles and dolphins on approach."

Set on the island of Hulhulé, the airport is connected to the nearby island of Gadhoo; and a 10 minute boat ride from the capital island of the Maldives Malé.