The Bombardier CRJ900 is designed to hold 86-90 passengers in a 4-abreast configuration with two lavatories and a galley as standard equipment. It can also be configured with optional 3-abreast business-class seating.

The Bombardier CRJ900 regional jet, a stretched derivative of the CRJ700 was announced in 1999. Assembly of the first production aircraft was started in 2001. The aircraft completed its first flight on 21 February 2001 at Montreal's Mirabel International Airport. In February 2003, the first aircraft was delivered to launch customer, Mesa Airlines, which has placed firm orders for 25 aircraft. Total orders for the CRJ900 are over 248 aircraft, of which, over 145 have been delivered.

The main cabin, by C&D Interiors, is nearly 24.7m in length with a centre-line width of 2.57m, and can seat up to 90 passengers. It is a spacious aircraft with two-by-two seating and provides more than 6ft 2in of standing headroom. The rear baggage compartment and underfloor baggage compartment provide a total baggage space of 25.57m³. The cabins are air-conditioned with a Liebherr air management system and the lighting system is supplied by Hella. 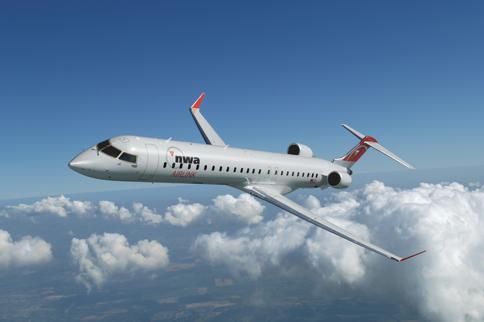