The London 2012 Olympics and Paralympics will attract huge numbers of visitors to London and other 2012 Olympic venues across the UK.

Adam Twidell (CEO of PrivateFly) comments: "It is now more difficult to get a landing slot at London City airport during the Olympics than it is to get a ticket for the 100m final."
Slots for major London airports are now severely limited over the duration of the Games, with wise private jet travellers turning to smaller, less well-known airports outside London in order to avoid the crowds.

In addition to the large spike in bookings for people flying into London for the Games themselves, PrivateFly has also seen an increase in demand for clients looking to escape London during the Olympics. Private jets will offer the most direct and effective method of travel for summer escapes, as airlines struggle under the weight of demand. See our recommended summer escapes

For London flights during the Olympics the advice is to book as early as possible. There are some airports which still have slots available, but as the Games start availability even from airports outside London will be limited.

Last minute flight bookings with no prior slot booking are likely to have to use airports further from London which do not require slots, such as Cambridge airport (which is operating 24hrs during the summer) and London Ashford airport to the South.

Smaller airfields, like Cranfield aerodrome near Bedford are gaining popularity. Cranfield has facilities to handle jets up to Gulfstream size and has a number of slots remaining, meaning it will be well placed for last-minute bookings.

The biggest factor affecting private jet operations in the South East is the introduction of airport "slots" allocation for all London private jet airports between 14th July and 15th August. This will mean that much of the flexibility usually associated with smaller airports like London Farnborough and Biggin Hill is limited.

The area of slot restriction extends as far as Oxford airport in the west, to Southend airport in the East. Gatwick represents the Southern limits of the restricted region.

More than ever, PrivateFly recommends booking as early as possible, as slots are taken on a first-come-first-served basis. Once an airport has allocated all of its slots for a date, there can be no further arrivals or departures from that airfield, meaning the flight will have to use a different departure/arrival point.

London City Airport is already extremely busy, with few slots remaining, and London Heathrow is not allowing any private jet movements at all.

RAF Northolt, too, will be unavailable for private traffic use between 25th July and 14th August as the RAF are basing a squadron of Typhoon Fighters at the air base to provide air support during the Games. It is the first time that fighter aircraft have been stationed at the airfield since the Second World War.

Private jet hire prices are available to book now and are based on a 3-day return price for the whole aircraft.
The map below shows London Airports and Helipads, however some airports and helipads may have limited availability or be closed for private flights during the Olympics. 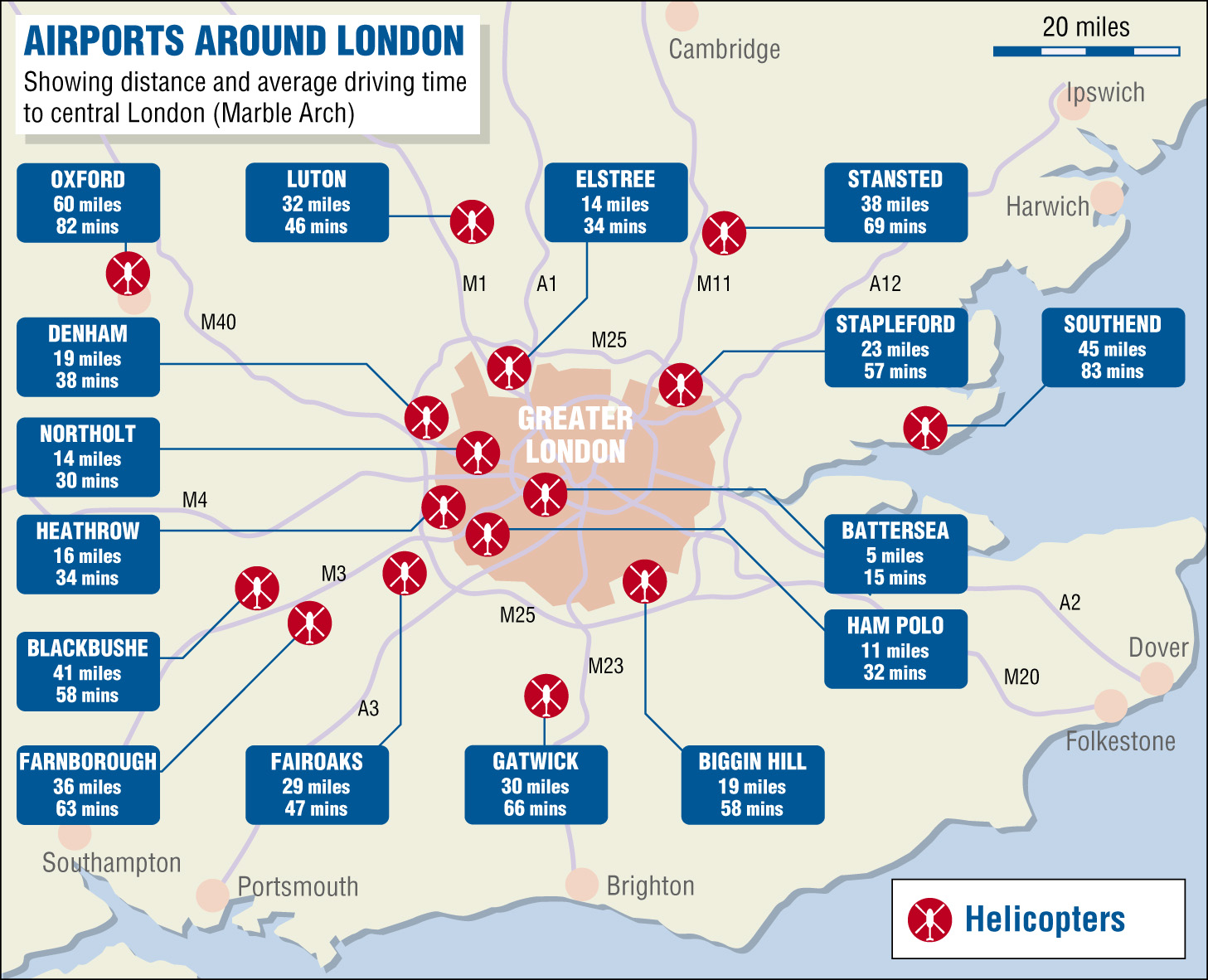 The London 2012 Olympics will be held at a number of venues across London and elsewhere in the UK. Below is a full list of 2012 Olympic sporting venues and the closest private jet airports and helicopter landing sites to each.

For a personalised quote for your private jet charter flight or helicopter hire to London further information please contact us or call 020 7100 6960 (24hrs).