THE PRIVATE JET MARKET IN GERMANY 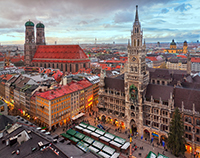 The German market plays an important role in the private jet industry, as one of the most stable and strongest economies in the world.

As the second biggest business aviation market in Europe (France is the first), Germany accounts for 100.000 movements per year which equates to a 14% market share in the European market.

In terms of private jet registrations, Germany leads the European market, with 17% of Europe’s fleet being registered there.

Notably Germany is predominantly a domestic private jet market. Over 50% of the flight activity is to or from another German airport, and collectively there are over 300 German airports seeing private aviation traffic.

However, the German private aviation market is in turbulent times, year on year showing losses of 4% versus the same period in 2012. The market and customer demands are therefore changing. Higher cost consciousness and tighter cash flows have allowed the ad hoc charter market in Germany to perform better than the fractional and card segments (with their upfront cost commitments).

Compared to other markets (such as France, where Paris and Nice dominate), the differences between various German airports in terms of movements are small. This can also be attributed to the fact that a large part of German’s private aviation traffic is for business purposes, and a significant number are domestic internal private aviation flights.

All of the Germans airports in the Top 10, including Frankfurt, and Hamburg are equipped with state of the art FBOs (private jet terminals), offering all amenities that can be expected by charter clients.

Here are the most popular private jet airports in Germany and their private jet flight movements, year to date, for 2013. 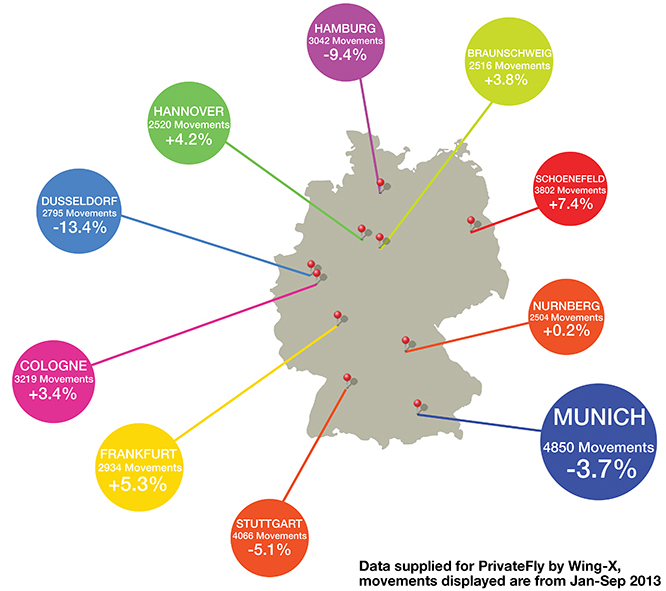 In Germany, domestic (internal) flights and connections with Paris, Zurich, Moscow, and London are the most important.

WingXAdvance analysis shows the top ten city pairings for business aviation flights from Germany, year to date, and their change compared to prior year.

The more frequented route from Germany to date in 2013 is the domestic routing between Ingolstadt airport to Braunschweig airport. Here are some of the popular routings and private jet pricing:

With 482 movements, there are over 50 flights per month between these city pairings. Connecting two important regional airports within Germany, this is a key business routing for the automobile trade within Germany.

Connecting two of Germany’s most important cities for business trade, this route sees over 30 private jet flights per month.

A popular route for Europe, connecting cities that hold both business and leisure appeal as a private jet destination. This route pairing typically sees 30 flights each month, year-round.

For business aviation flights within and from Germany, the most popular aircraft by some way is the Cessna Citation XL, with over 4500 charter movements in the German market so far this year (Jan-Sept). This is no surprise, as the most popular private jet in the world is also the most widely available and desired jet in the charter market.

The Citation jets perform well generally, with the CJ2 and the CJ1 taking second and third place in popularity terms, flying on average 280 flights a month in the German market.

When we look at market growth, market austerity is certainly playing its part. The only aircraft showing increased usage in the German market are from the turboprop category. Both the King Air 200 and the King Air 90 are showing over 7% growth year on year, reflecting the increased popularity of the turbo prop during the recession.

At the larger end of the scale, the Airbus A-319 corporate airliner (typically seating 30 people in VIP configuration) is also a popular charter aircraft in Germany. To date this year, there were 1449 charter movements. Other larger cabin aircraft in the top 10 include the Falcon 200 and the Challenger 600 aircraft.

For private jet charter prices to Germany, or for any global routing, call the PrivateFly team on 020 7100 6960 or contact us