THE PRIVATE JET MARKET IN SWITZERLAND

Switzerland is a business aviation market that punches well above its weight. One of Europe’s smaller nations with a population of just under 8 million, it has one of the continent’s busiest business aviation airports, with Geneva Cointrin second only to Paris Le Bourget.

For private jet charter prices and aircraft availability for flight to or from Switzerland call our 24 hour team on 020 7100 6960 or search for instant estimate prices from your local airport: 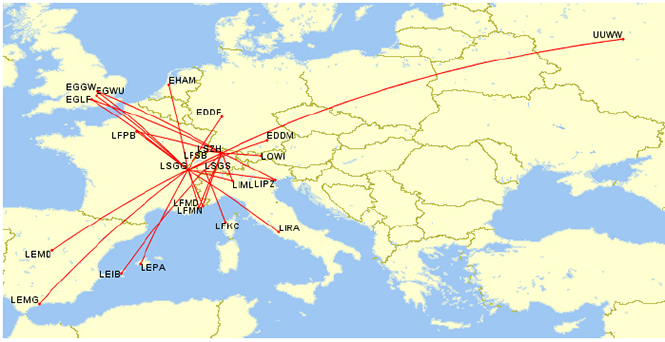 Switzerland has the fourth largest number of private jet flights in Europe behind France, Germany and the UK.  On average, Switzerland sees 56,000 business aviation flight movements per year.

In common with the whole of Europe, Switzerland has seen a small decline in private aviation volumes over the past year. Flight departures have fallen by 5% year to date, with Europe seeing  a 3% decline as a whole.

Zurich airport is also a busy airport for private jets, and is the sixth busiest airport in Europe with 21,671 annual flight movements. 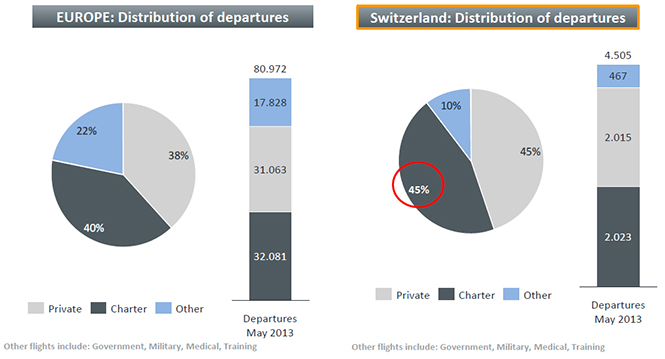 When you compare charter versus private flights (fractional or private-owned), the country has a higher proportion of charter flights than average, with 45% of its May 2013 departures being on chartered aircraft (versus 40% across Europe).

Charter is proving more resilient to market decline than private flights. May 2013, for example, saw just a 2.3% reduction in volumes for the charter segment against May the previous year, whereas a much bigger drop of 8.5% was seen for private or fractional flights.

So, private jet charter share in Switzerland is increasing, which underlines the wider trend towards charter from fractional users. The flexibility and cost-effectiveness of charter have grown in appeal since the recession, and online booking technology has made private jet charter more attractive and accessible.

In Switzerland, domestic (internal) flights and connections with France, Germany, UK and Italy are the most important. Geneva to Paris Le Bourget is consistently Europe’s most frequented route for business aviation. WingXAdvance analysis shows the top ten city pairings for daily charter flights from Switzerland* and their change in frequency year on year (during May 2013).

There are just over 100 private jet flights, on an average day between Geneva Cointrin and Paris Le Bourget.  Connecting two of the most important business destinations in Europe, this is the most popualr private jet routing in Europe, year-round.

#2 - PRIVATE JET FROM GENEVA TO NICE

With an average of 74 flights per day, this routing is particularly popular during the summer months in Europe, when the Cote D’Azur becomes one of the most popular private jet destinations for leisure and business travellers. Private jet airport map and prices to Cote D’Azur

#3 – PRIVATE JET FROM GENEVA TO ZURICH

Seeing 40 aircraft movements per day, the route between Geneva to Zurich is a regular empty sector routing with private jets positioning across Switzerland for their next flight. The route is also popular for internal business trips, ski season flights, and international flight transfers. 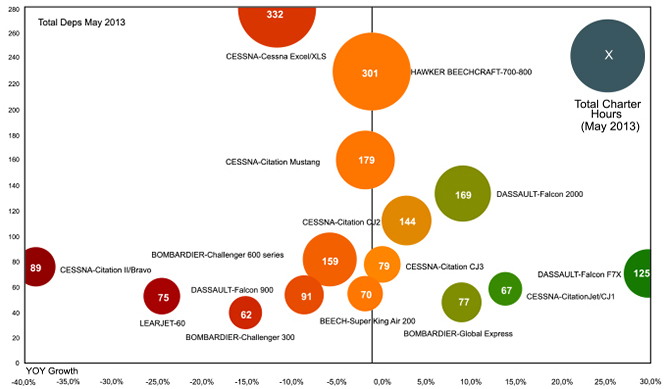 Switzerland has an increasingly high emphasis on business jets, with turboprops suffering more from market decline in 2013 to date (down by 13.6%).  Flight volumes in business jets fell by just 1.9%.

PrivateFly customers are more likely to choose larger aircraft when flying in or out of Geneva. Sometimes this is due to higher passenger numbers, but there are also those looking to use more impressive and spacious aircraft, for status reasons.

Despite most of its routes being just a 1 to 2 hour flight time, it’s the larger business jets that are growing in flight departure volumes for charter from Switzerland, despite the overall decline. It’s clear that when it comes to choosing a business jet in Switzerland, size matters.

*Source: WingXADVANCE.com and PrivateFly data. All aircraft pricing are market estimates and subject to availability.