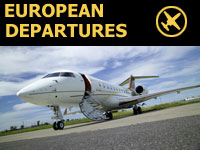 There are over 3000 airports in Europe, and only 10% of these airports are served by scheduled flights.

When you fly by private jet you choose the most convenient airports for your flight, and avoid lengthy journeys to and from airports.

For private jet charter prices from your local airport call our 24 hour team on 020 7100 6960 or see instant estimate flight prices for any flight worldwide online:

For more airport and private jet facts and figures see our Private Jets in Numbers feature.